The puzzle had concluded. The winners had been found.

On the subreddit used to post the book codes, 3301 posted the following image: 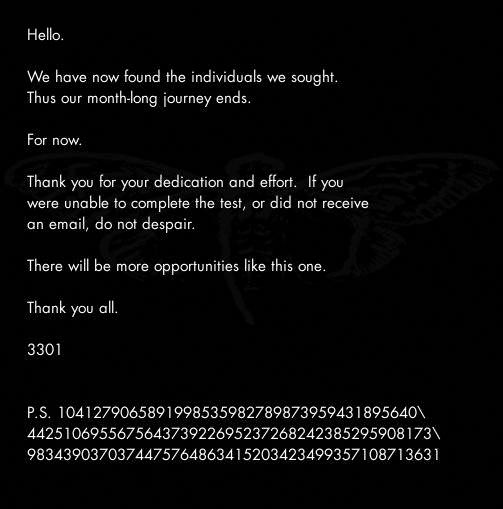 Of course, as we know, this message was 3301 saying that they would continue to post puzzles in further times, as proven in 2013.

The interesting part of this image though, is the number sequence.

The copyable plaintext for this sequence is as follows:

Backslashes were removed as they are commonly used in mathematics to signify that the number continue on the next line.

Interestingly, the number's most prominent property is that it is not prime. Coming from a puzzle where almost every single number is prime, it was very very intersting to find this. The number is made up of 131 digits, which is a prime number itself. It cannot be divided by any number from 2 to 10. Finally, there is no possible way to add 3 square numbers together to equal this number.

Converting to ASCII, binary and hexadecimal reveals nothing.

It is also impossible to convert this number into letters using gematria.

Correct factorization can be found in this article:

Note that those factors were used in the "Triangle Puzzle" but it was confirmed to be a troll, so the real meaning of that long 131 digit (436 bit) number is still unknown.

Retrieved from "https://uncovering-cicada.fandom.com/wiki/The_Final_Puzzle?oldid=31899"
Community content is available under CC-BY-SA unless otherwise noted.